15 Fun Facts About the Bird-in-Hand Stage

When you see a show in Lancaster County, you’re sure to be entertained. People come from far and wide for high-quality, Broadway-style musicals, wholesome, family-friendly comedy, variety shows and more on the Bird-in-Hand Stage.

But when you’re enjoying the entertainment, do you ever wonder what happens behind the scenes? Read on and find out!

The curtain first went up in autumn 2011. The first show was a dramatic musical mystery called The Confession; about a young Amish woman caught in the middle of secrets, scandals and surprising plot twists. The show has sold more than 200,000 tickets since its premiere.

The original stage was 10 inches off the floor, and the audience sat on banquet chairs.

“Over the years, we’ve raised the ceiling to provide more headroom throughout the space and raised the stage 4 inches in order to improve sightlines for the audience,” says Donna Dorough, stage manager at Bird-in-Hand. “We have also added new chairs to make the room more comfortable for our guests.”

Bird-in-Hand is thrilled to have staged shows from Blue Gate Musicals from our first season. Blue Gate Musicals was formed in 2010. Ever since, they have created original shows that are as relevant and meaningful as they are entertaining—and most are set in the heart of Amish Country.

Bird-in-Hand has staged 13 different Blue Gate Musicals shows since we opened in 2011, including The Confession, Half-Stitched, Stolen, the ever-popular Josiah for President and The Christmas Tree Ship. 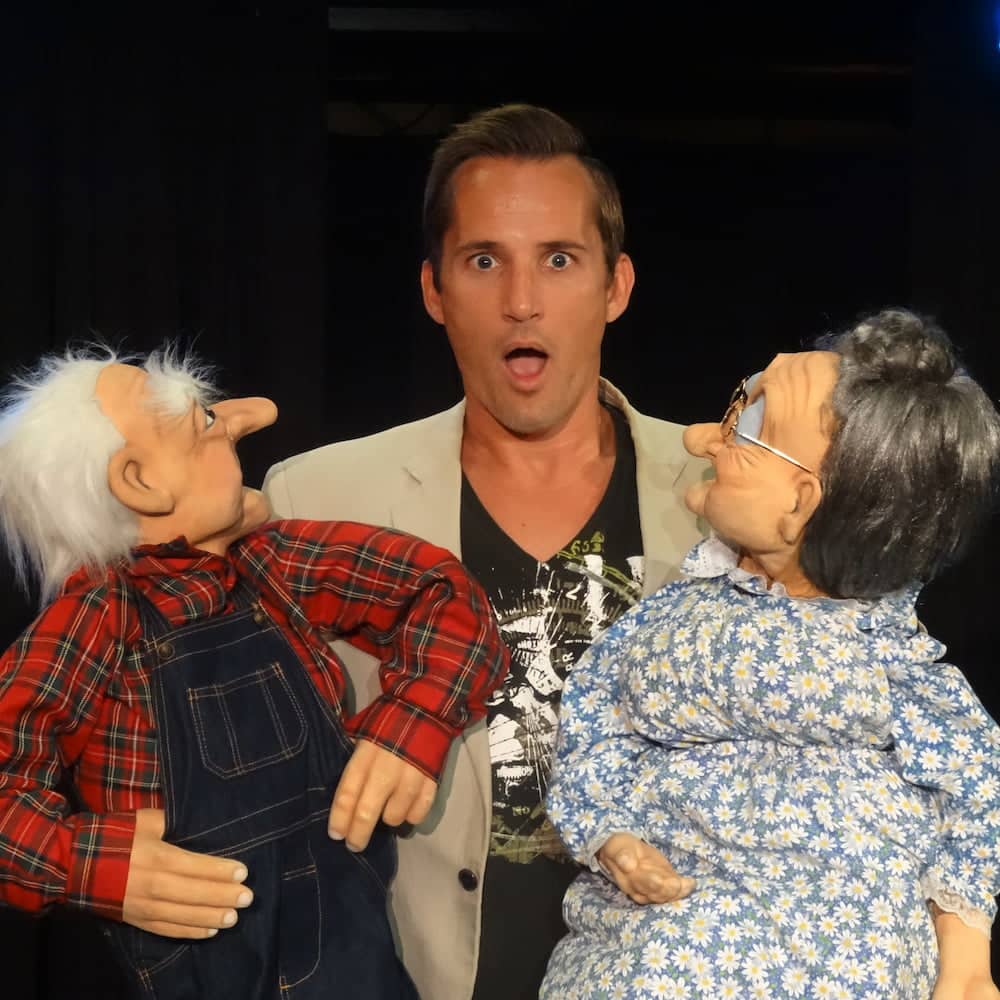 Ryan & Friends shows are an immensely popular feature on the Bird-in-Hand Stage.

Entertainer and all-around funny guy Ryan Bomgardner, whose Ryan & Friends shows are an immensely popular feature on the Bird-in-Hand Stage, began his career at age 12 when he tried ventriloquism at his grandma’s church. By the time he was 18, he was doing 80 shows a year. When he worked for Disney worldwide, he did 175 shows a year.

“I love to make people laugh and, unlike stand-up comedy, ventriloquism connects with all ages,” Ryan says. “I love that we have folks ranging from grandparents to grandkids and everyone in between who love to laugh and get an encouraging message along the way.”

Ryan is a Lancaster County native. He and his wife live 10 minutes from where they grew up.

“We travel all over, but when we’re home, we’re surrounded by all our families,” he says.

And travel he does! In addition to his appearances on the Bird-in-Hand Stage, he entertains at private events, churches and other venues in Pennsylvania and beyond. Earlier this summer, he performed in Colorado, Illinois and the Amish Country Theater in Ohio. In February 2023, he is scheduled to tour Egypt, Jordan and Israel.

Our other casts come from all over. Blue Gate Musicals holds auditions throughout the United States, and the theater company also accepts online submissions. It announces upcoming audition dates and locations on its website.

Performers cast in Blue Gate Musicals receive their music and lines and arrive in Bird-in-Hand ready to rehearse.

“One week prior to show opening, they come to our property, move into the cast housing and start rehearsals,” Donna says. “They open without a hitch.”

Not only do the performers have to learn their lines, the songs, enter and exit cues and the blocking, but they also handle all stage setup and prop changes before, during and after the show.

Nathan Garner and Monica DePaul, featured in this season’s production of Josiah for President, have performed together more than 1,000 times. Both are tremendously popular with Bird-in-Hand audiences, having appeared on our stage since the early days.

Nathan Garner, who stars as Josiah Stoltzfus, has been on our stage for seven years.

She’ll play the role of Elizabeth Stoltzfus in Josiah for President in September and October. She has also performed at Sight & Sound Theatre, Fulton Theatre and Servant Stage Company and is artistic director at Cavod Theatre in nearby New Holland.

Martha Bolton, who writes the stories and scripts for the Blue Gate Musicals shows, was comedian Bob Hope’s first full-time female staff writer. She wrote for more than 30 hours’ worth of prime-time TV specials and personal appearances over 15 years.

Her work on the Emmy Award-winning special, Bob Hope—the First Ninety Years—earned her a Writer’s Guild Award nomination. She has authored 88 books and also wrote for Phyllis Diller.

Neither Ryan nor the Blue Gate Musicals cast have understudies or swing performers. They perform all scheduled shows. Out of 2,500 performances, Ryan has only missed one show due to illness. With his “friends,” however, it’s a different story.

Ryan has spare characters (some identical) in case they’re ever lost or delayed in their travels. This saved him in December 2021 when the airline lost his luggage on a return flight.

Dan Postuma, co-founder and president of Blue Gate Musicals, has won four GMA Dove Awards for outstanding achievement and excellence in Christian music. He started his decades-long career as music director for Bill Gaither and Amy Grant and went on to produce artists such as Charlie Daniels, Debby Boone and Clint Black, producing more than 25 #1 radio singles.

In 2010, he partnered with Mel Riegsecker to create entertaining, faith-oriented original musicals.

Blue Gate Musicals’ founding partner Mel Riegsecker, the eldest son of an Amish family, grew up on the family farm. He wasn’t interested in farming or making harnesses, as his father had, but he turned his hobby of making miniature horse-drawn vehicles, complete with horses and harnesses, into a business.

As the business grew, he moved the operation into The Shipshewana Craft Barn, which eventually grew to encompass the Blue Gate Theatre.

Ryan’s show changes each season, with new songs, new comedy and a revolving cast of characters. And because he interacts with the crowd, often improvising based on what states or regions are represented in the audience, each show is unique and special. 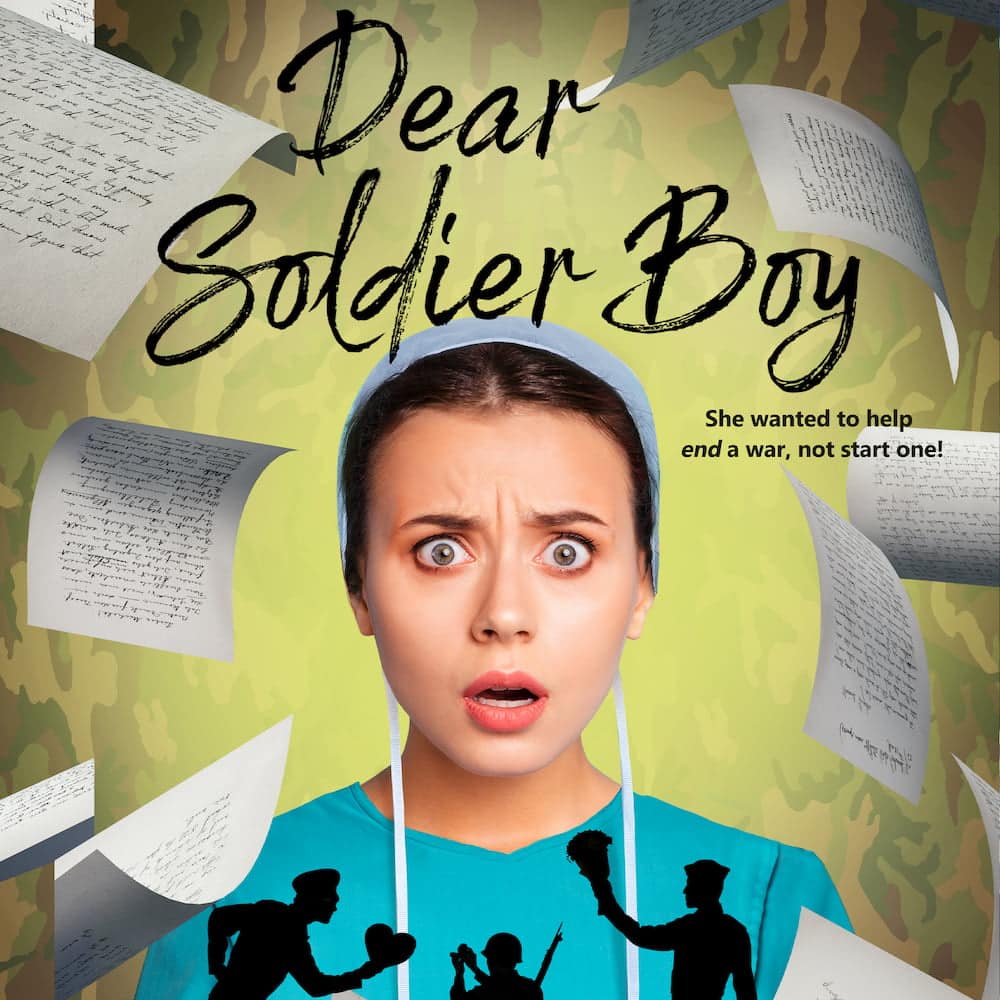 Experience Dear Soldier Boy in the 2023 season on the Bird-in-Hand Stage.

Dressing rooms are simple—and shared. Behind the curtain are separate dressing areas for male and female cast members, with costumes, storage and appropriate lighting for makeup, etc. Speaking of costume changes… Over the years, Ryan’s character Jeffrey has had more than ten different costume changes. Audiences have seen him in a tuxedo, a coat and tie, and an Amish child’s outfit, right down to the straw hat.

Director and composer Wally Nason began his musical career as an elementary school music teacher, served as worship leader at a mega-church in Arizona and then spent a decade as vice president of Continental Singers before moving to Nashville to work in the Christian and Country music industry. In 2009 he composed his first show for Blue Gate Musicals and had been a key part of the creative team ever since.

The Bird-in-Hand Stage show season generally runs from April through the end of the year. We stage two to three different Blue Gate shows throughout the year, with some 200 to 225 performances, including afternoon matinees and evening shows. Ryan & Friends are on stage from April through October.

Shows scheduled for the 2023 season on the Bird-in-Hand Stage are Dear Soldier Boy, Ryan & Friends: Never Speechless, The Home Game and Our Christmas Dinner. Tickets are on sale now! 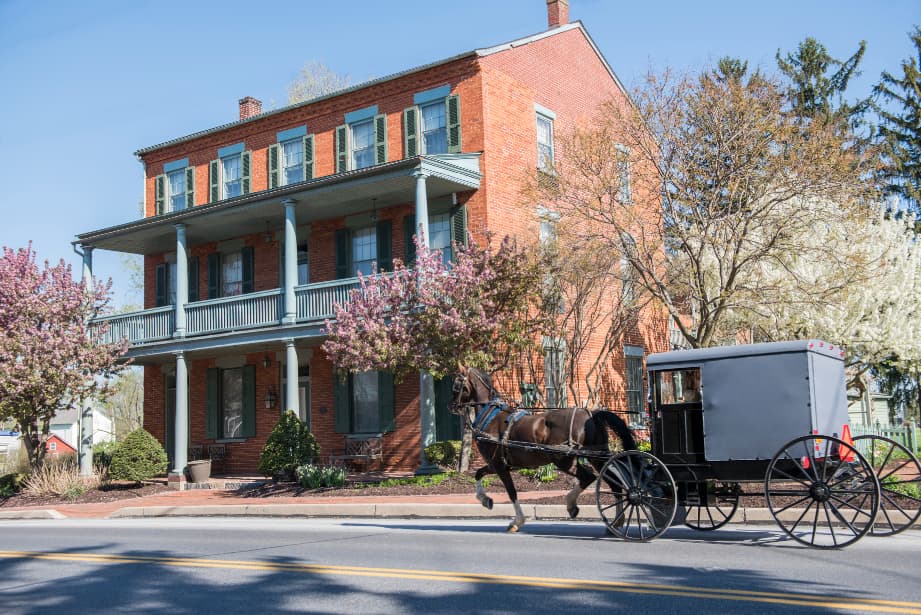 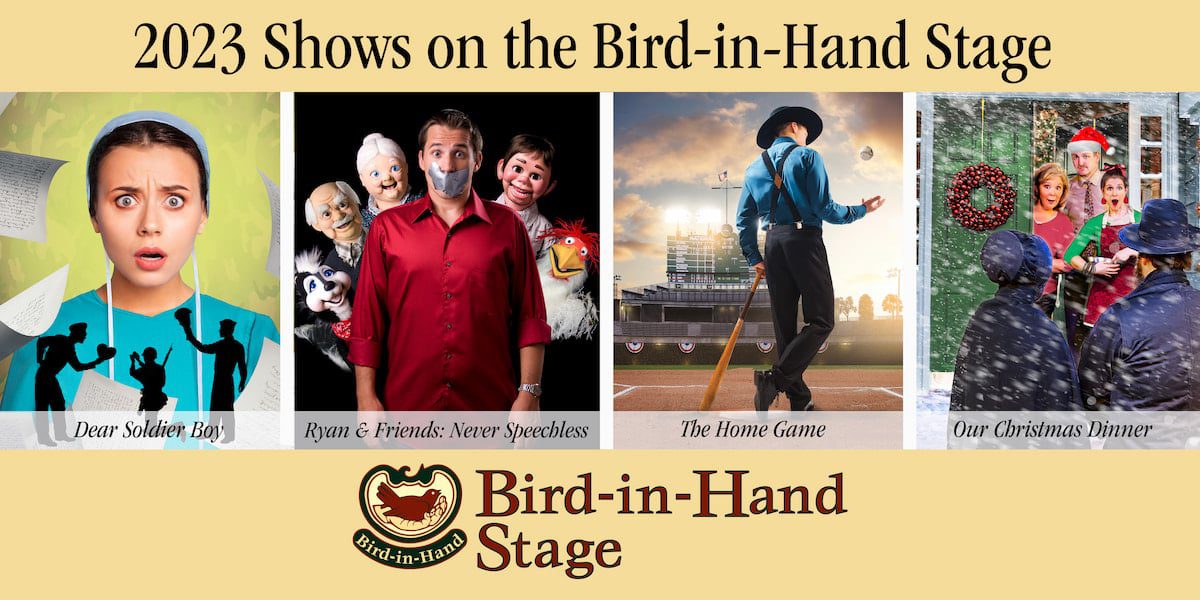 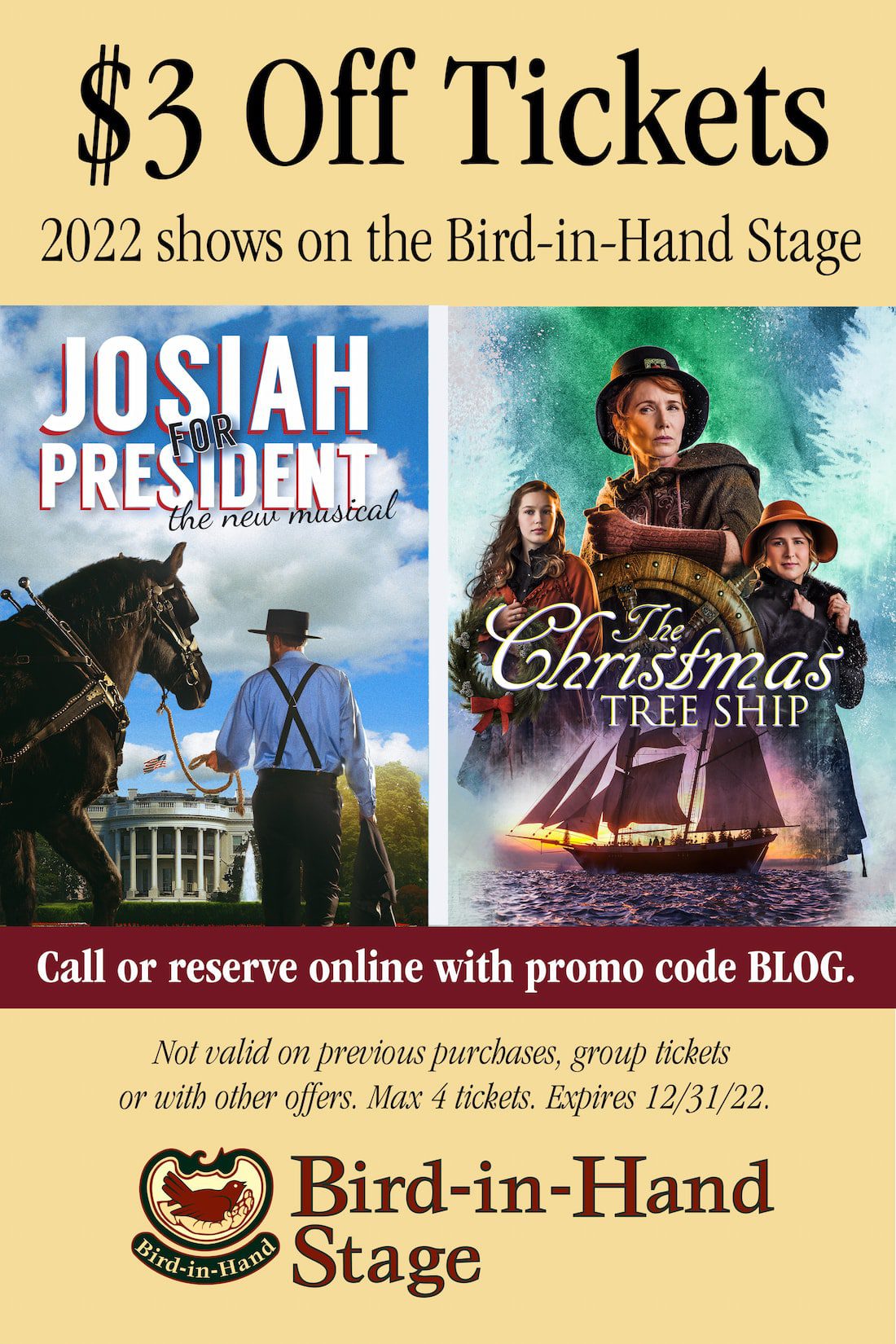